New thermal regulations are designed to improve the energy performance of buildings by limiting the need for air conditioning and controlling electrical demand. New “performance-based codes”, similar to ones that have been in place in Europe for years, are starting to make their way into North American jurisdictions. 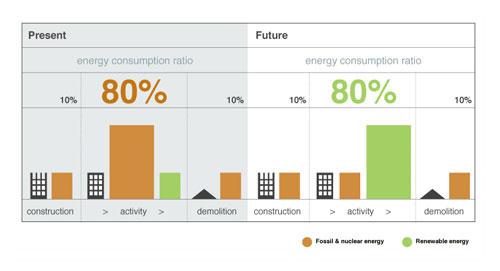 Published as Part 11 of the California Code of Regulations, Title 24, this legislation covers residential and commercial buildings, schools, health facilities, and state buildings. The code includes a performance-based element requiring reductions in energy use compared to the ASHRAE 90.1 – 2007 standard.

The City of Vancouver plans to implement a “performance-based” system with hard caps on how much energy a building can consume per square metre. Vancouver’s buildings are nearly 25 per cent more energy-efficient than Canada’s minimum national requirements, but the city still lags far behind such jurisdictions as Frankfurt, Germany, which has had per-metre energy consumption caps in place for years.

This trend in legislation and regulations has created new opportunities for the optimization of conventional design processes. It will also speed up implementation of cutting-edge innovations and technologies.

LEED was developed by the U.S. Green Building Council in 1998 and is intended to provide building owners and operators with a concise framework for identifying and implementing practical and measurable green building design, construction, operations and maintenance solutions. Since then, it has grown from one standard for new construction to a comprehensive system of six standards covering all aspects of the development and construction process. As of April 2009, there were estimated to be LEED projects in 92 countries and over five billion square feet of commercial building space was involved in the LEED certification process.

Commercial vs. residential use

At the federal, state or province and municipal levels of government many rebate and incentive programs have been implemented to encourage green building standards. These rebates vary and can include the fast tracking of building permit approvals for green buildings, reduced fees for permits and inspections, subsidies of the cost of design and providing free technical assistance. The City of Calgary, for example, provides rebates valued at up to $100,000 for buildings constructed to green standards.

Copyright of all materials on this website, including the underlying HTML, text, illustrations, designs, icons, audio clips, video clips, documents, products, software and all other content is owned by the Altex Window Fashions.

Window Fashions Depot is a distributor of Altex, Sunproject & Coulisse product line and represent the brand as a affiliate dealer

All trademarks used and/or displayed on this website are registered or unregistered trademarks or official marks of Altex Window Fashions.

Under no circumstances, including, but not limited to, negligence shall the Window Fashions Depot be liable for any direct, indirect, special, punitive, incidental, or consequential damages arising out of the use of, or the inability to use, the website and/or the materials.